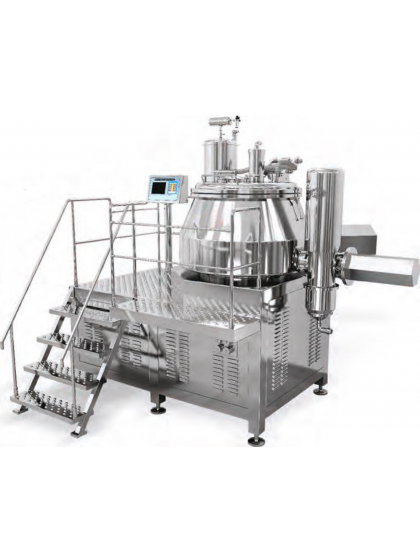 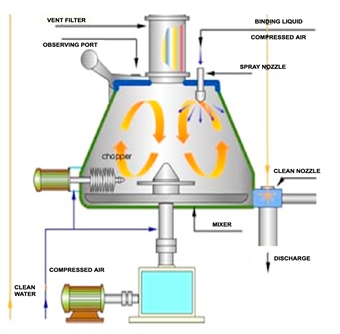 Mixing Chambers in Rapid mixer granulator is of 3 types Conical shaped , Domed shape , and Circular shaped although the basic aim behind all the shapes is to eliminate the dead points and wall adhesion i.e.the powder may not adhere to wall from where it cannot detach leading to inefficient granulation as well as mixing .

Filter assembly is on the top of port in this vent air filter is placed which allows the purging air to leave the Mixing chamber and retains the granules inside .

Purging air air coming from gasket present below the impeller at an pressure of 5-6 kg and prevents the mixing of granules with lubrication of impeller thus preventing contamination .
Impeller the Science behind

The speed of Impeller should be high enough to cause Roping flow motion as slow speed causes Bumping motion of powder and leads to Inefficient mixing .

Bumping motion and Roping motion
At higher speed of Impeller size of granules increases and if high speed is for longer time due to continuous collisions between the particles the size of granules will decrease .
The gap between base of mixing chamber is around 2.0 mm which is enough that the granules pass below the impeller blade without breaking .

Chopper the Science behind

The use of chopper should not be done always as we know the chopper will break the granules.
Firstly look weather active is free flowing or cohesive , weather it lumps or not .Chopper should be used if active is cohesive or forms lumps at the minimum speed after solution addition .

Binder should be added slowly not suddenly as sudden addition of binder leads to inefficient distribution of binder and may cause hardness variation in tablet .

Ampere load on Impeller and Chopper i.e the current which is used by Impeller and chopper motor to rotate when granules are formed . Ampere load is high in beginning when granulation starts as motors need more power and decreases as end point is reached .
End point could also be determined by ensuring the Vortex formation Generally done by Research and Development personnel during Optimization of batch.

Rapid mixer granulator
How much powder to be granulated is active .
Does the powder Densify or Swell on solvent addition and to what extent
Is material constant
Is Dip tube length (Solution entry tube) lesser than the height of powder.