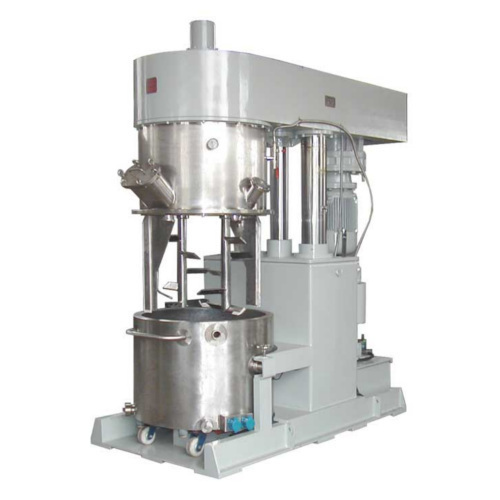 Planetary Mixer – The planetary mixer is so named because the mixing blade (commonly known as the beater) rotates in a planetary motion inside the mixer bowl. The bowl of the single planetary mixer consists of an upper cylindrical section and a lower hemispherical section. The mixer bowl is secured to a semi-circular frame (also termed as “fork”) at the time of mixing. The beater profiles are shaped to match the lower curved surface of the bowl. The beater has two types of movements: it revolves on it own vertical axis at high speed. At the same time, this vertical axis rotates around the center of the bowl at a relatively lower speed.

The direction of rotation of the beater on its own axis and that around the axis of the bowl is in opposite directions. The planetary motion is generated by mounting a gear pinion on the beater shaft, which is driven on a stationary internal gear ring. Figure 1 is a schematic representation of the drive arrangement for creating the planetary motion.

The planetary motion of the beater is very effective in mixing the contents of the bowl. There are virtually no dead spaces in the mixing bowl. Scrapers with Teflon edges may be provided to wipe any material which may stick onto the internal surface of the bowl.

Single planetary mixers are relatively inexpensive, versatile, and can be constructed in a range of sizes. The popular features of this mixer are the possible use of multiple bowls and beater designs with the same mixer assembly.

The most commonly used beaters are the batter, wire whip, and hook type. The batter beater is the used for cake batters and general mixing applications. The wire whip is used for beating egg foams and cream. The hook beater is used for mixing and kneading yeast dough, and bread or dough for pastry.

After the mixing is completed, the bowl is lowered and can be easily detached and removed from the mixer assembly. The mixer bowl can be removed by either lowering it beneath the beater, or raising the beater above the bowl. The lifting and lowering of the bowl is through a manual arrangement for small size mixers. For larger units either the bowl is lowered beneath the motor or the drive system along with the beater is raised above the bowl, using a motorized or hydraulically operated mechanical arrangement. The bowl can be moved away from the machine using a suitable trolley with wheels (usually termed as “dolly”). Figure 3 is the photograph of 150 litres single planetary mixer.

The discharge of the mixer bowl can be carried out by hand scooping or through a bottom discharge valve. For materials that do not flow easily, hydraulically operated automatic discharge systems may be used.

Since the planetary beater is mounted from above the mixer bowl, there are no packing glands or seals in contact with the product. This eliminates the possibility of product contamination due to sealing or packing material, as well as eliminating the need for repacking whenever there is a product change.

The single planetary mixers are available in small sizes suitable for home kitchens to production size units with capacities of 300 liters. The mixer motor may range from fractional horse power ratings for smaller sizes to about 10 – 15 HP for the 300 liters mixer, depending on the material to be mixed.